BeeGFS works with lightly weighted, high performant service daemon(s) in the user space over the arbitrated filesystem, such as ext4, xfs, zfs, Hadoop. This allows users to release maximum bandwidths, the higher performance of the hardware realm and delivers network wires speed to the applications. The native BeeGFS client and server components are available for Linux on x86, x86_64, AMD, ARM & OpenPower, or any other CPU architectures.

The unique userspace architecture concept of BeeGFS allows users to keep the metadata access latency (e.g., directory lookups) at a minimum and distributes the metadata across multiple servers so that each of the metadata servers stores a part of the global file system namespace.

By increasing the number of servers and disks in the system, it is possible to scale performance and capacity of the filesystem to the level that you need, seamlessly from small clusters up to enterprise-class systems with thousands of nodes. 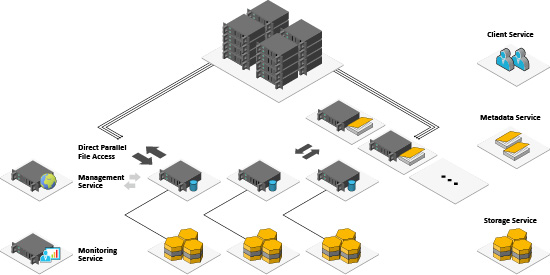